A grand weekend of Bualadh Bos(ton) 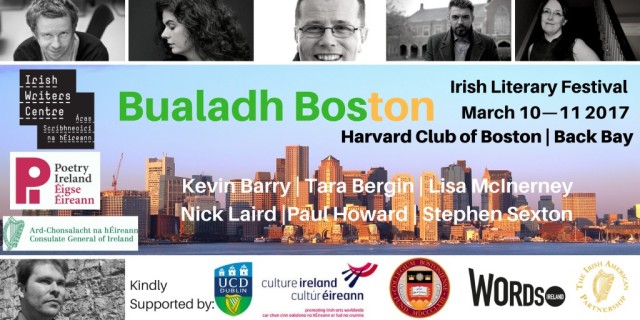 Apparently, “Bualadh Bos” is a phrase in Irish that means applause, and there was plenty of cause for cheers at the recent Irish Literary Festival, held for the first time at the Harvard Club in downtown Boston and arranged by a whole bunch of clever cultural ambassadors from the Irish Writers’ Centre, Poetry Ireland, and the Consul General of Ireland to Boston, Fionnuala Quinlan (@IrelandBoston). (My companion and I had a lovely conversation with Ms. Quinlan during the reception on Friday, and she’s  delightful. I hope she has reason to remain posted in Boston and help arrange many such events in the future.) 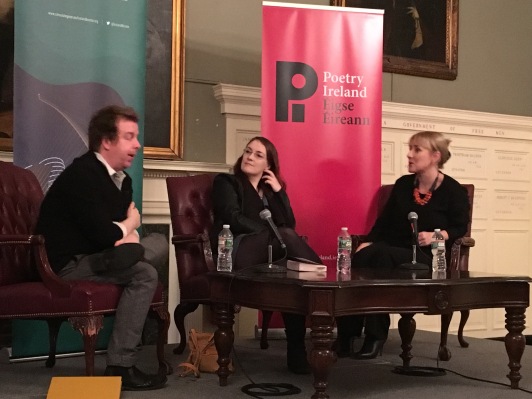 Barry read a section of one of his short stories, and McInerney from her recent award-winning novel, The Glorious Heresies. Both authors were excellent readers of their own work; funny, dramatic, and engaged with both the text and the audience, which meant that my companion and I both left the evening more interested in reading more of their work, rather than less, which can be the case with less skillful presenters. 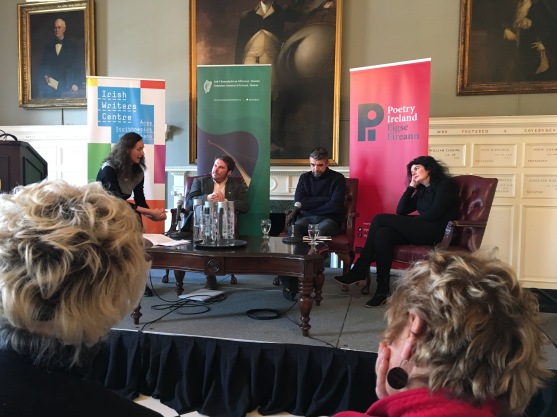 The next day we got to hear readings of some fantastic poetry from Tara Bergin, Nick Laird, and Stephen Sexton. Bergin’s poetry is lyrical, with an element of folklore-sound to it without ever directly referencing specific legends. You can read a review of her debut book, This is Yarrow, here.  Laird’s poetry was sharp and wound round itself like an ammonite, and frequently referenced current events and recent scientific thought. You can read his article “Why Poetry is the perfect weapon to fight Donald Trump” here. Sexton’s poetry was often, though not solely, humorous; he noted as he began that when picking his poems for the event he discovered “[he had] a lot of hobbies for about three weeks,” which was long enough to work them into a poem or two before going on to something new. You can read one of the poems he read that day here: “The Curfew.”

Though my companion and I bought several books at the event, which I am reading with great pleasure, I also went and found more of their poetry after the event. My current favorite is Bergin’s “Appointment with Jane Austen,” especially appropriate as I shall shortly be undertaking a literary pilgrimage to Austen’s country myself. 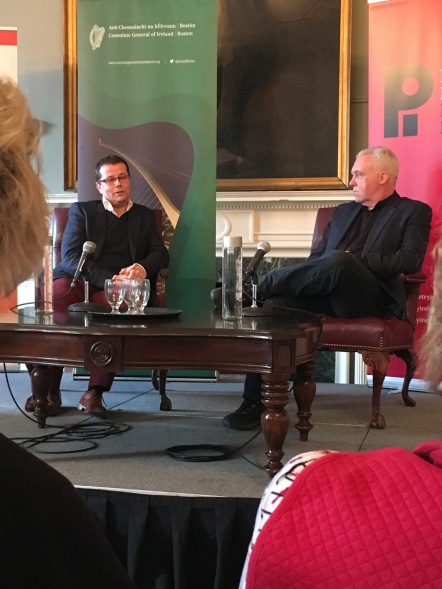 The last event of the weekend was Boston Globe columnist and journalist Kevin Cullen interviewing journalist and novelist Paul Howard. They spoke of everything from sports journalism and doping scandals to the success of Howard’s satirical main character, Ross O’Carroll-Kelly, in whose Homer-Simpson-esque adventures and foibles Howard keeps a running commentary on current events in Dublin and to a lesser extent, the wider world.

Overall it was a fascinating weekend, and I was only sorry that it seemed the event had not been widely enough publicized, as the room was moderately full but deserved to be more so on each of the two days. As it seemed many in the audience, like myself, were being introduced to most of these writers for the first time, the event definitely succeeded in its stated purpose to use Ireland’s literary offerings as a bridge to new audiences and new opportunities, and Boston was a perfect place to hold such a gathering. I will be keeping my eyes out for announcements of next year’s Irish Literary Festival, for sure.

Jump into the conversation, the water's fine! Cancel reply