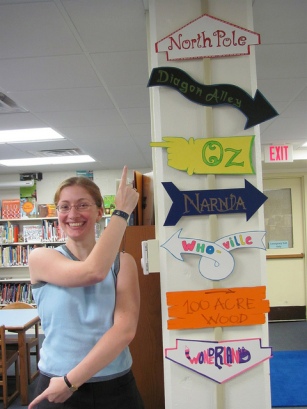 Library directionals, designed and created by Kathleen and Meg Winikates, 2012

What is it about a place that grabs hold of the imagination?  Is there some magical combination of language and  association and vista and memory that makes a place ‘real’?  Is one city the same to different people and are we the same person in one city as we are somewhere else?  Just what do we get when we gaze out over the water, anyway?

Two different sessions I attended at this year’s Mass Poetry Fest dealt with the themes of people in places – the reading “Poetry of Place,” with poets Cammy Thomas, Julia Lisella, Theodora Stratis, and Rosamond Zimmerman, and “Writing the Sea: Poetry of the New England Coast” with poet/professor Elisabeth Weiss Horowitz.  They were both incredibly thought provoking in their own ways.

This is the place. Stand still, my steed,
Let me review the scene,
And summon from the shadowy Past
The forms that once have been.

The Past and Present here unite
Beneath Time’s flowing tide,
Like footprints hidden by a brook,
But seen on either side.

“Poetry of Place” featured a lot of different ways to think about how we locate ourselves.  The poets involved offered readings of their own poems that dealt with place as a way to connect to memory, to family, to the present, to a collective cultural heritage, to the structures we inhabit, and even to the boundaries of our own physical bodies.

Are you still yourself in a leopard’s skin?

How does living abroad change the way you see your home and your relationship to it?

Why is New England different from New York, and why are our pasts so much more present here?

Can the paper of a poem be a place, with poems nested within each other?  (Admittedly, that last one required some brain bending on my part, but that’s what this kind of event is good for, and using color to identify an inner poem within the overarching poem was a neat experiment.)

This session made me think a lot about the grounding I get from living here in Massachusetts, only an hour’s drive or so from where I grew up.  I’ve always been a Boston Girl, but why is that?  As I’ve been rereading and organizing my poetry for a project, the prominence of place has grown pretty evident, as I was writing about it even when I wasn’t thinking about it consciously.  I’m looking forward to going back into some of those poems to think harder about why where they are and where I am is so important.

“Writing the Sea” was definitely the most immediately effective at getting me to put pen to paper.  I’ve always been drawn to water (*squints at blog title*), and Horowitz assembled an impressive array of historical and contemporary examples of poets inspired by stints along one New England shore line or another, including riverbanks and lake sides as well as ocean beaches.  I’ll breakdown why this was such an effective workshop in my next post, but it certainly helped that she maintained an excellent balance between highlighting particular lines, themes, and commonalities within and among the poems with a set of great writing prompts.  Even the simplest instruction to write a word bank of as many water-related words as we could, from any discipline, led to my dredging up words I haven’t used since I worked at the New England Aquarium.  Some of them have a lot of evocative possibility: “pelagic,” “phytoplankton,” “undertow.”

One of my favorite prompts was inspired by an Inuit form of poetry, in which the last word of the line becomes the first word of the next, and we were asked to write a flowing poem about rivers in a handful of minutes.  This is my attempt, though in a second draft I think it would need more actual focus on the water as well:

I haul on the mainsail sheet,
the sheet that shivers in my hands,
these hands that rein the wind
winding through my city.
City buildings soaring high
and higher above their echoes,
echoing in slices under my hull.
Hull cupping me as I brace
the bracing wind, balanced on the mainsail.

Do you have a favorite poem that is grounded in a particular place?  Please share in the comments below, I’m always looking for the next great read!

Jump into the conversation, the water's fine!